Correlates of Satisfaction Among Clients of a Public Defender Agency 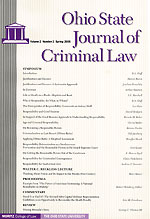 Discussions of indigent defense often neglect the voice of the people these systems are designed to represent. This article addresses that gap by presenting findings of a study of client satisfaction from a rural public defender agency. One hundred twenty clients were asked about their satisfaction with their attorney, focusing on whether there were particular actions or behaviors that contributed to greater satisfaction. Attempts were made to administer the questionnaire twice, both early on in the case and after case disposition, as well as to clients both in and out of custody. Findings revealed that clients were generally satisfied with their public defender and that such satisfaction correlated with indicators of communication, investigation, and advocacy. The ways in which the resultant measure of satisfaction could be used for professional development and considered as an indicator of quality defense are discussed.