Lest We Forget: A Historical Analysis of Police Line of Duty Deaths in Indianapolis 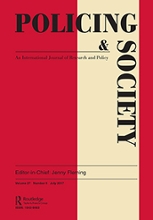 Previous studies on police line of duty deaths are limited by their heavy reliance on traditional data. While the FBI’s Law Enforcement Officers Killed and Assaulted (LEOKA) data have undoubtedly advanced what we know about violence against police, placing line of duty deaths in their social and historical context poses challenges. Further, only a select number of variables are available for event-level analyses from traditional data sources. In this study, we utilise data culled from several open-source materials to present a comprehensive analysis of police line of duty deaths in Indianapolis, Indiana from 1880 to 2014. Descriptive findings for several incident, victim, and offender-level variables are presented, while placing fatal attacks on police within their sociohistorical and situational contexts. Two themes emerging from open-source data are also used to make sense of our descriptive findings. The first theme captures shifting circumstances from public to private line of duty deaths, while the second theme suggests how advancing technologies have been used to benefit police work while also introducing new risks to officer safety.