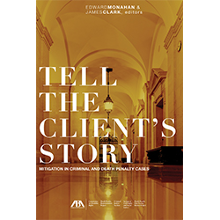 The path to a life sentence does not begin in the last stage of the trial during the penalty phase. The presentation of mitigation has to start at the earliest stage possible, or else the defense runs the likely risk of jurors viewing mitigation evidence as disingenuous, as an excuse for a terrible crime, and therefore as aggravating. Although we know from research and experience that introducing mitigation evidence as early as possible through a process called frontloading is key to its consideration, seting the stage for mitigation and introducing jurors to the idea of mitigation should occur long before the trial begins. In this chapter, we discuss ways to make that happen, thereby reinforcing to jurors that mitigation is both a key and legitimate consideration in their determination of the sentence to be imposed. We begin the chapter with general considerations for setting the stage for mitigation. We then discuss the different times and ways in which mitigation can be addressed both before and during a trial.